Zooming-in to the Fascinating Life and Death of Drone Bees

When you think of a honeybee hive, you often think first of the egg-laying queen or the ever busy female worker bee.

However, there is a very important member of the hive that often gets forgotten: the drone bee. No, we’re not talking about the robot bees we’ve been hearing about.

Drone bees are the male counterpart to the worker and queen bees, and play a minor but important role in the development of the species.

Birth of the Drone Honey Bee

Drone bees are born from unfertilized eggs, dictated by the queen based on the size of the cell she lays them in. Drones make up only about 15 percent of the total population in a hive, so it’s important that the queen lays the right eggs to keep the colony balanced. Drone brood cells are built larger than the worker brood cells, signaling to the queen that she should not fertilize the egg she is about to lay.

Once the queen lays the drone eggs, young worker bees will feed them royal jelly. The royal jelly contains richer nourishment than normal honey, and will only be fed to the egg for the first 2-3 days to give it a boost in development. After the third day, drone brood is kept on a mixture of honey and pollen until its development is complete in 24 days. 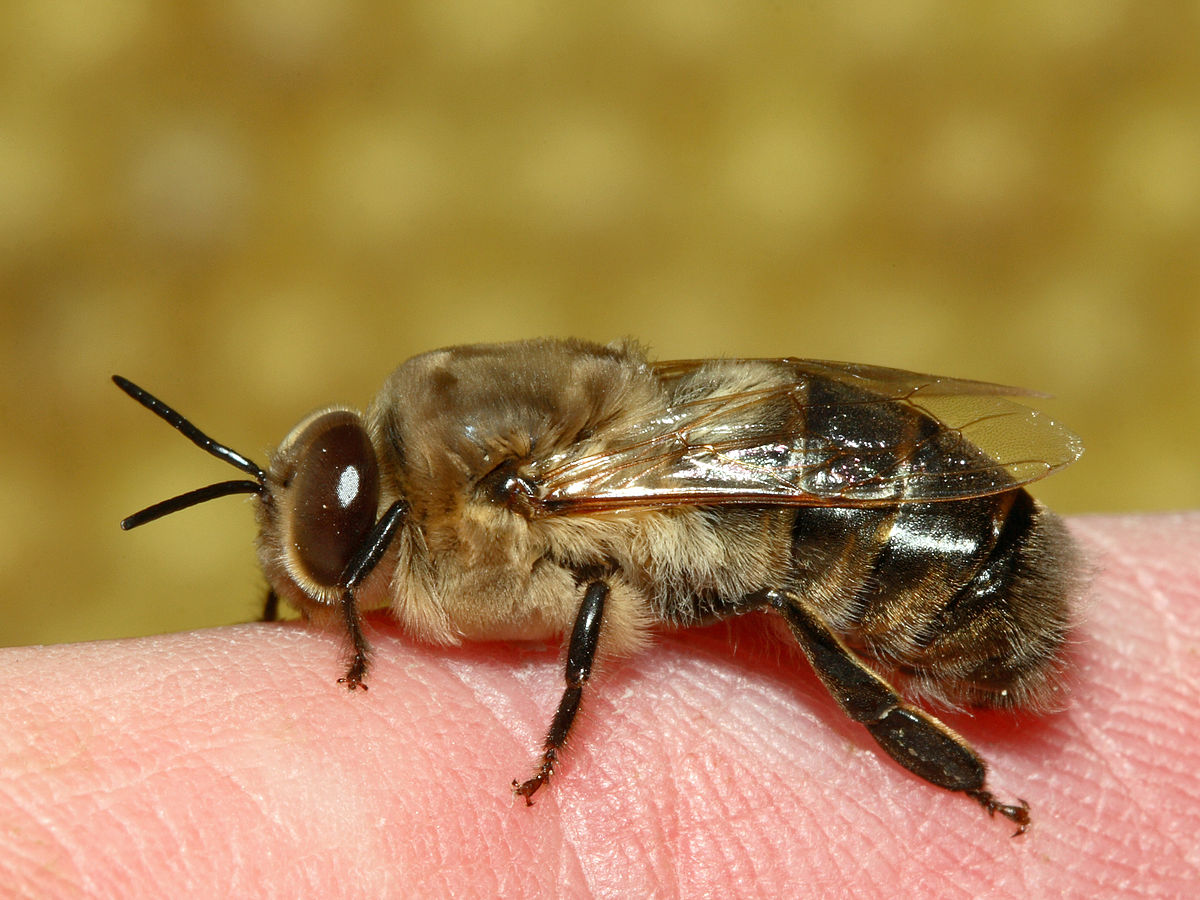 Life Around the Hive

Once born, drone bees don’t do much to help around the hive. The sole purpose of the drone bee is to procreate, and it is unable to fulfill any of the various roles of the worker bees. Drone bees have no honey sacs to collect pollen and nectar, no wax glands to build comb and cannot secret royal jelly to feed the brood. Drone bees must rely on the effort of the worker bees to stay alive long enough to mate with a new queen.

While the drone bees may be unable to assist with the construction of the hive, they are able to help the worker bees regulate the temperature. When the hive starts to rise, drone and worker bee alike will line up and flap their wings to cool it down. This keeps the nest from overheating, which can damage the development of new brood.

Mating with a Queen

After a few weeks of exploratory flights, a drone bee will begin searching for new queens to mate with. Every year thousands of drone bees leave their hives to form a “drone congregation area” up to 300 feet in the air. Thousands of drone bees gather in these areas, each waiting for the virgin queens to come out for their nuptial flights.

Once a queen arrives, it becomes a race to see who can successfully mate with her. Each queen will mate with only 10-20 of the thousands of drone bees competing to get in the mating distance. The entire process takes the queen about half an hour, after which she will return to the hive to begin production of her eggs.

The unsuccessful drones will continue to search for another queen to mate with until it needs to return to the hive for feeding. Those drones that are successful have a much darker fate in store, as they die soon as the mating is complete.

Besides the mating, drone bees contribute in other ways as well. They pass on crucial behavioral traits such as hygiene to new generations of honey bees through their genes. The other thing that they do is regulate the temperature of the hive. This is essential for the development of young bees and larvae. Honeybee larvae are highly dependant on precise regulation of brood nest temperature for their development.

End of the Drone Bee Lifecycle

The life cycle of a drone bee varies from several weeks up to four months, depending on how successful it is in finding a queen. There are two ways in which a drone can die: mating with a queen or hive eviction. It is possible for a drone bee to live up to 3 or 4 months. By the end of the summer, they are expelled from their colonies. Either way, by the end of autumn, a few or no drones will be around.

Drones that are able to get within mating distance of a young queen will inject their barbed reproductive organ into her “spermatheca” organ. Once mating is complete, the reproductive organ is ripped from the body of the drone, killing it instantly. The queen then flies off in search of another drone to start the process again.

Drone bees that are unable to mate with queens will continue back and forth between the drone congregation areas and their hives. As winter approaches, the worker bees begin to take steps to conserve their honey resources for the colder months. Since the drones become useless after the mating season, the worker bees kick them out of the hive. With no access to food or shelter, the abandoned drone bee will either freeze to death or die of starvation.

Made it so far? As you might have gathered, drone bees lead a fascinating (yet somewhat tragic) life. Here’s a quick cheat sheet of fun facts about drone bees you should remember for future reference: