In the world of beekeeping the invention of Langstroth hives around 1852 revolutionized the way bees are raised. Now Flow Hive Technology is doing the same thing again, introducing a new way to harvest honey that is much less disruptive to the bees than other techniques. The basic concept of honey flow frames is to put honey on tap directly from the beehive. Honey flow frames like those in the EzBee Auto Flow 7 Comb Ultra Simple Beehive Kit are an important element in Flow Hive beekeeping.

The honey flow frames work within the Langstroth style beehive box, enabling the beekeeper to siphon honey directly from the hive without opening the hive lid or disturbing the bees. A tap is attached to the honeycomb flow frame. When this tap is opened, the cells formed by the bees are split open inside just enough to allow the honey to flow down through the box, into a sealed trough and out of the hive into a collecting jar. The bees remain in the hive and are virtually undisturbed throughout the harvest process. The flow frames are beehive frames to which partially formed honeycomb cells are attached.

Once these frames are installed inside a conventional beehive box, the bees finish building the comb and then fill the cells with honey. Then they cap the cells as usual. What the bees don't know is that these honey flow frames are made in two halves, so when the splitter/tap is turned on, the honey flows out of the hive without having to remove the wax seals. Once the honey has drained into collection jars, the tap is returned to its original position. The bees then chew through the wax seals and continue their work of making honey.

The harvest process takes between 20 minutes and two hours, depending on the temperature and the thickness of the honey. The steps of uncapping and extraction, both requiring special equipment and a lot of work on the part of the beekeeper, are unnecessary when using the honey flow frame technology.
This development greatly streamlines the harvest operation. It not only saves the beekeeper time but also eliminates the heavy lifting and moving of frames. The developers and manufacturers of the flow frames are confident that this system will increase the size and health of bee colonies because it creates so little stress on the bees.

The EzBee Auto Flow 7 Comb Ultra Simple Beehive Kit is a set that can be used to convert a standard Langstroth hive into a flow style. It contains seven Auto Flow Combs, one harvest key and seven harvest tubes. This kit can be installed in a standard 10-frame Langstroth style hive box or super with some modifications. Instructions to modify the hive box to accept the auto flow combs are included with the kit.

The instructions included with the EzBee Auto Flow 7 Comb Ultra Simple Beehive Kit describe how to assemble the frames and how to convert a standard 10-frame Langstroth beehive super into an auto flow style beehive incorporating the EzBee Ultra Simple Auto Flow frames. The frames are clear, food grade plastic to help the beekeeper to see the right time to harvest honey. The conversion requires putting doors into two ends of the hive box.

The four flow comb beehive frame kits we are comparing range from two priced at around $90, one at around $100 and the EzBee Auto Flow 7 Comb Ultra Simple Beehive Kit at around $200, the most expensive. All are available at Amazon.com.

How Does The EzBee Auto Flow 7 Comb Ultra Simple Beehive Kit Compare To Others?

We picked a few similar products available on the market to see how they compare.

This kit is priced at around two hundred dollars plus shipping.

To use the EzBee Auto Flow 7 Comb Ultra Simple Beehive Kit in an existing Langstroth beehive, the only modification required to the bee box itself is the cutting and fitting of two access doors in the sides of the structure. These doors allow access to the working slots and honey pipe outlets and provide a good view into the workings of the hive itself. The beekeeper can watch the actions of the bees, see when each comb is full and check on the health of the bees without having to open the lid of the hive.

The manufacturer claims this unit is simple to assemble and includes directions on assembly with the purchase. Setting up an existing hive to include the honey flow frames involves some major carpentry work on the original box to create the two doors that are an important.

This concept potentially revolutionizes how beekeeping is done and could be a real boost to dwindling bee populations by promoting growth and good health in the hives that will remain undisturbed while the bees go about their important work.

No specific warranty is mentioned, but the manufacturer, a third generation beekeeper, boasts USA support, USA returns, USA parts in stock and great free advice. The product ships from Los Angeles and there are no import fees or issues with international damage claims.

The YaeTek 7Pcs Auto Flow Comb Beehive Frames Kit comes with seven frames, seven harvest tubes and one harvest key. The harvest tubes are used at harvest time to create the pathway for honey to flow out of the hive. The harvest key is essential to the operation of the system so it's important to keep it in a safe place where it will be accessible at honey harvest time. This technology is especially good for people just getting started because if they utilize the honey flow frame concept they won't need to purchase or use uncapping equipment and extractors.

This kit is priced at around ninety dollars.

This is the honey flow frame's claim to fame. Once installed it is very easy to use and very easy to let this system do most of the work of harvesting honey when the time comes.

The actual assembly and placement of the flow frames in a super or beehive box is easy. The modification of the box to include the windows/doors that are essential for monitoring the activity in the hive are a more challenging project.

This relatively simple invention is an ingenious approach that not only simplifies the work of the beekeeper but helps to provide a better environment for the bees. 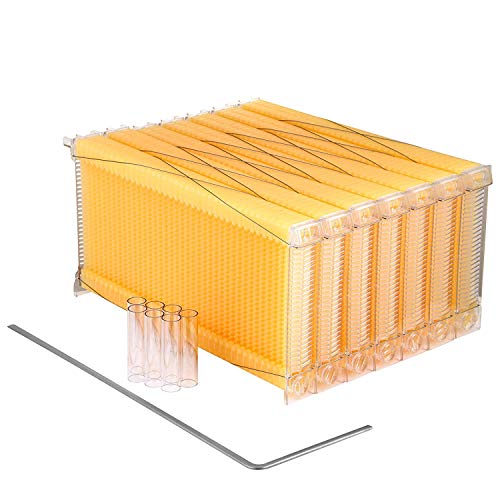 The VEVOR 7Pcs Auto Flow Bee Comb Beehive Frames Kit comes from a company that offers a variety of products for beekeepers including beehive kits in the traditional style and an auto flow frame wooden beehive designed to accommodate the flow frames right from the start. This kit is similar to the others we are comparing in that it has the seven frames, seven harvest tubes and the harvest key. The honey auto flow frames are designed to accommodate as much honey as the bees will make. By carefully monitoring the hive activity, harvest can take place as needed. The frames can be separated for cleaning purposes and then assembled together when they are dry. This product comes with excellent illustrations of how the whole process works.

This auto flow frame concept is very easy to operate. The beekeeper still needs to keep an eye on things and monitor the health and activity of the bees, but the day-to-day operation of the hive and continual production of honey comb and honey requires very little effort. Harvesting the honey has many steps eliminated while the condition of the bees is much more positive.

Modification of existing Langstroth style boxes is required or the purchase of a beehive specifically made to accommodate this style frame.

The concept of this style frame is a dynamic development in the history of beekeeping. It has the potential of helping beekeepers maintain and grow their colonies to larger sizes without requiring a significant investment of time or money.

The Happybuy 7Pcs Auto Flow Comb Beehive Frames Kit is ideal for both novice and professional beekeepers who have a flow beehive or who are willing to modify their traditional style hive. The frames are made of high-quality food grade BPA plastic and are corrosion resistant. The harvest key is made of stainless steel. The kit includes seven frames, seven harvest tubes (one for each frame) and one harvest key. It comes with a manual that not only details how to use the kit but gives information on how to maintain the frames and the process.

The Happybuy Flow Comb Beehive Frames Kit is priced at around a hundred dollars.

Once installed this system is very easy to use and offers the possibility of a larger harvest than possible with traditional harvest techniques.

Modification of an existing beehive box is required or purchase of an auto flow frame beehive. This would work well for the beginner who hasn't already invested in and committed to a different style of beekeeping.

This is a real innovation in beekeeping. The Australians who developed this concept spent years researching and testing their concept. This represents a dramatically different concept that offers significant advantages for the beekeeper and the bees.

All four of these kits contain the same parts for the auto flow frame system. The specs on the EzBee Auto Flow 7 Comb Ultra Simple Beehive Kit indicate that the kit may be heavier in weight than the others but in the photos it appears nearly identical. These kits are offered by different companies that sell to the beekeeping industry and market this product as part of their broader product lines. The price of the EzBee Auto Flow 7 Comb Ultra Simple Beehive Kit is twice the price of the other three kits we reviewed. The contents of the kit are the same as the other three kits.

The concept of the auto honey flow frames is such an exciting one for the beekeeping industry that all of these kits earn high marks for being part of such an innovative movement. We give the EzBee Auto Flow 7 Comb Ultra Simple Beehive Kit  3 stars on a 5 star rating system for being comparable to the others but at a price that is considerably higher.