You’ve probably wondered, “Are bees poisonous?” at some point in your life. I sure have, just a little while ago, in fact. While out with a walking mower recently, my footsteps must have seemed like small earthquakes pounding the earth to the countless insects in hiding below. Grass clippings shot across my legs as I tried not to think about the huge green sea of uncut grass before me. Suddenly, a searing and agonizing sensation shot into my awareness like lightning.

My whole attention was instantly on my ankles, as I looked down to discover several yellowjacket wasps furiously stinging right through my thick socks, repeatedly stabbing into the flesh like little daggers.

“How can something so small cause so much intense pain?” I thought, risking my hands as I crudely smacked away the little marauders. The pain only became more and more intense as the surrounding tissue started to swell. Then it started to feel hot, turning red. Later on, the itching persisted for multiple days. It felt as if the wasps had injected a poison into my skin.

Wasps are not bees, of course, but they do sting. So, are bees poisonous or not? The answer is both simple and complex. They are venomous, but not poisonous. To understand what that means, we have to look at the key differences between a venom and a poison.

Venom and poison are both toxins that can be dangerous, harming or even killing in some cases. However, they are also very different, allow us to elaborate.

As an example, we’ve all heard of poison ivy, the shiny three-leaved notorious plant. Poison ivy is famous because it creates a nasty rash on any unsuspecting hiker’s exposed skin. The leaves of the plant may poison a person who accidentally rubs against them while walking by. Although the plant isn’t doing anything other than existing quietly in one place, it leaves a lasting impression on those unfortunate enough to step into its domain.

On the other hand, venom is active. It is a toxic substance that animals produce and deliver to their victims. Some examples are wasps, snakes, scorpions, and bees.

Once the animal in question injects the venom into an unfortunate victim’s bloodstream, it has a harmful or even lethal effect the same as would a poison. However, for it to be an effective, the animal that produced it must go on the attack. The venom does absolutely nothing for a bee that thinks it can just sit there and give a man mowing the lawn the evil eye.

Animals evolved venom for self-defense and to help them stun and kill their prey. It’s a specialized type of poison. The relatively complex molecular structure of venom prevents it from being easily absorbed through the skin. Animals actively inject venom into the bloodstream, but poisons, on the other hand, can often go right through the epidermis on their own.

To take this a bit further, if a bee just sat on your skin and squirted the venom on you, it might be a bit humorous or slightly annoying, but that’s about it. Also, even if you were to swallow venom, it’s possible that stomach acids could break it down, rending it useless before it entered the bloodstream. HINT: Don’t try that at home, of course. It’s just a theory, but It does look as if scientists have tried it out with some success on chickens for some reason.

It’s not common, but as with most things, there are exceptions to the general rule. One animal that is venomous and poisonous at the same time is the blue-ringed octopus. These amazing creatures can deliver a lethal bite and can also kill those who try to eat them thanks to a toxin in their bodies. The toxin, called tetrodotoxin, is absorbed into the bloodstream because of a small molecular structure.

In the case of bees or wasps, you probably will never consider eating one anyway. Even if you somehow ingest one, the risk would still come from the stinger’s venom, not from a poison. Incidentally, a dead bee can still deliver venom through its stinger. Now, for the really desperate, bees with the stinger and legs removed could make for a meal for a stranded hiker without other survival options on the menu. The strange idea of eating a bee made the “honorable mention” on a list of edible insects for Backpacker.com. We’d sooner eat a termite though…

Normally, bee venom is not dangerously toxic, causing only local pain and swelling. However, if a person becomes allergic, then the bee venom can trigger reactions in the body. Those reactions can be similar to the way poison affects the body. Nevertheless, it’s the allergic reaction that is the real problem.

“Are bees poisonous or not?” That is a question that rightly concerns people with allergies. Unfortunately, some people’s immune system can become oversensitized to bee venom. The body then produces antibodies against the venom. The reaction triggers the release of Histamines by the body, causing painful tissue swelling. In severe cases, the life-threatening condition called anaphylactic shock can occur. The throat swells, and breathing becomes difficult. However, cases of this are very rare.

An estimated one percent of children and three percent of adults are prone to the often deadly allergic reaction. In any case, people with allergies can carry epinephrine to counteract the allergic reaction. For this small percentage of the population, a bee’s venom is sadly as dangerous as a potent poison on the body.

Any person who experiences severe symptoms from a bee sting should seek emergency care. Call Poison Control at 1-800-222-1222 anywhere in the United States for more information.

Fortunately, the general prognosis for most people allergic to bees or wasps is that they will improve after about a week. The prognosis will depend on the severity of the allergic reaction and how quickly the person gets medical help. The more severe the reaction at the site of the sting, the more likely it could affect the whole body.

Image by M. Roth from Pixabay

In general, people who are not allergic to bees can generally tolerate 10 stings per one pound of body weight. After that, the collective stings could be deadly.

So, if someone asks you, “Are bees poisonous or not?” you can tell them that they are venomous, but adults could tolerate as many as 1,000 stings, but that depends on the individual. Children, however, are more vulnerable. If they are stung over 500 times, a child could die. It’s a general number, not a hard-and-fast rule by any means. Still, for those who are not allergic to bee stings, bees are generally harmless except when there are a high number of stings. 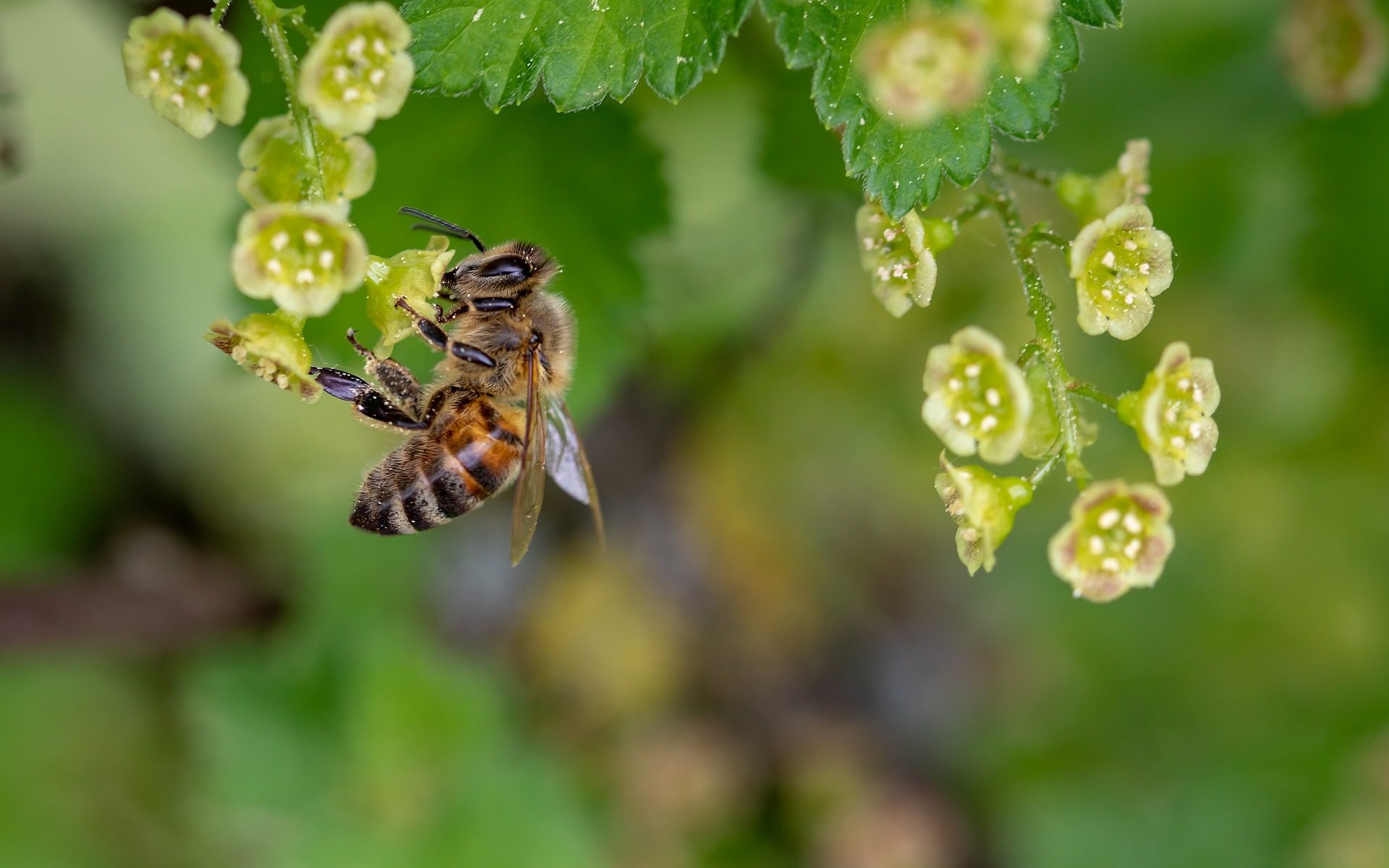 No, they are not poisonous, but their sings are venomous. Although there can be dangerous allergic reactions in rare cases, bee venom, especially when delivered from a beneficial honeybee, is relatively harmless. A reckless or unlucky person seen as an immediate threat to the hive is the exception. In that case, get the heck out of there and seek professional medical help if there are any questions.

From a bee’s perspective, a honeybee would obviously much rather go about its business than give up its life. A honeybee risks losing its stinger in a human’s thick skin, which proves lethal for the bee. That’s because of its anatomy. The honeybee’s stinger has barbs on it. Once lodged in a human’s thick skin, the bee must rip off the stinger to break free, which kills it. On the other hand, a wasp’s anatomy is different. The female wasp’s stinger has no barbs, and thus she can deliver painful repeat stings throughout her life, as I, unfortunately, found out that day mowing the lawn.

I don’t recommend one tries to find out the difference between how a wasp sting and a bee sting feels, but if you have no choice in the matter, you’ll probably find out a wasp packs a comparatively mean punch. Their venom seems to be particularly potent. Again, please consult your doctor if you have questions or concerns about bee or wasp stings.

So, the next time someone asks you, “Are bees poisonous?” you can educate them about the difference between poison and venom.